The Castle of the Oleśnica’s Dukes

The Dukes’ Castle (also known as The Castle of the Oleśnica’s Dukes, The Oleśnica’s Castle or simply The Castle in Oleśnica) is the most valuable architectonical site in Oleśnica and one of the biggest and well-preserved castles in Lower Silesia. At the same time, it is the least known. Originated as a medieval borough, became a Gothic castle, and then the Renaissance residence of local dukes, which has been renovated many times. 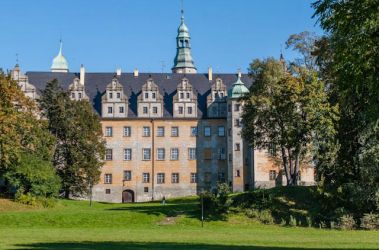 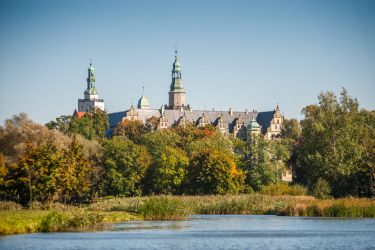 View of the castle from the ponds (WałyJagielońskie)

In the 13th century there was a borough at the place of today’s castle. It was located on a hill surrounded by waters of the Oleśnica River and the moat. We can assume that it was encircled by anearth rampart madewith palisades and had one gate, and a bridge over the moat. After location of Oleśnica in 1255 its importance grew and once it became a boarder borough of The Duchy of Głogów in 1294, the cylindric tower was builtto increase its defensive capabilities. After The Duchy of Oleśnica was found (1312-1313) it may have been a seat of The Olesnica’s Duke Boleslaw.

The Castle of Piast’s Dukes 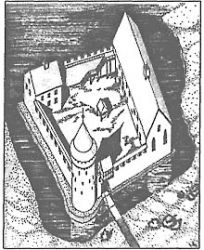 After 1323 Conrad I, another Duke of Oleśnica, moved there and started transforming the borough into a castle. He replaced the earth rampart with a brick defensive wall. Instead ofthe existing wooden residential, representative and farm buildings,the brick ones were built. The castle could have looked like the one presented on the picture above.
There was a representative residential building located at the west side of the castle and the curtain wall surrounded it from the three other sides.The entrance to the castle has been located on the north side with a cylindric tower in the corner. In the second corner, there was a tower based on a rectangular plan. The Dukes of Oleśnica remained in the castle till 1492.

The Castle during the reign of Podiebrad Family

After 1495 the next ruling family sat down in the castle - thePodiebrad Family.John I, theDuke of Podiebradrebuilt the castle between 1542-1562. During the first phase of works, the existing Gothic castle, was rebuilt in the Renaissance style especially in the residential area. The second phase (1559-1562) included the construction of so-called Palace, an elevation of the castle tower (1561) and construction of the foregate - the barbican (1563). During the reign of Duke Charles II, another rebuilt took place. Between 1585 and 1616 the following elements were built:

The castle survivedin this shape - although with manymodernizations - till our times. 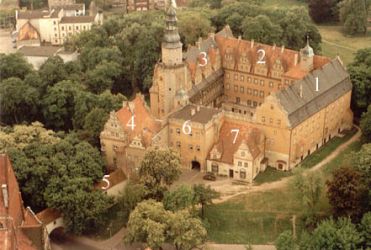 1 - the west wing (view after modernization in 1750), 2 - the south wing, 3 - the east wing, 4 - the palace. 5 - the connector between the palace and the church, 6 - the gate’s building (many rebuilds), 7 - laterfarm buildingfrom the 18th century(picture from the collection of The Catalogue of documents of social life(Polish: DŻS) 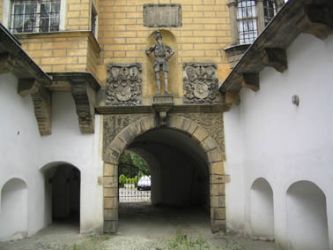 The entry gate to the outer yard of the castle. Above the gate there was a statue of Duke JohnPodiebradwith the foundation plaque visible above it. Additionally, there wereheraldic reliefs next to it. The walls of barbican and the remains of pavement for the guards and embrasures (bricked up) were visible below. 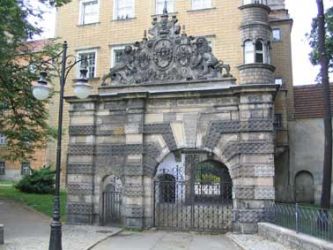 The main gate to the castle. The finial features a heraldic composition that includes coat of arms of CharlesII (The Duchy of Ziębica and Oleśnica) and his two wives.

WirtembergsFamily rebuilt the castle to create the residential palace. To achieve that, firstly the stables were moved from the east wing to the area outside of the castle. Then the interiors were renovated in the Baroque style. The ceilings of few chambers were decorated with stucco decorations, ceilings, and paintings. The few chambers on the second floor were rearranged in one big room that served as a dining room and a theatre. The paintings of The Wirtemberg’s Family have been hung there. The windows were expanded to allow more lightinto the room. The corridors were created, and the staircase was built in the east wing. The French Garden (arrangedlater in the English style) was created between the south wing and the pond. Also,the new greenhousewas built.
The noticeable changes were made also to the west wing - the mansard’s roof was created (around 1750). The new rooms for courtiers and the stuff were built.

The first representant of this family, Frederick August, began further changes in the interior design in 1793. However, without a possibility to expand the castle further, he focused on The Palace in Szczodrem, which became his greatest residence after 1802. The Oleśnica Castle deprived the rank of the duke’s seat. Between 1816-1884 the duke’s clerks were based in the north wing of the castle.

From 1885 The Castle of Oleśnica became the seat for everyheir to the throne of The German Empire and The Kingdom of Prussia. Thanks to that its importance grew. Between 1891 and 1906 the castle was renovated and modernized. It wasadjusted to the modern needs (it was equipped in the plumbing and heating, baths and toilets were built, lighting wasinstalled). The changes visible inside the castle included among otherselevation of The Hunting Hall (now the Knight’s Hall), decoration of its ceiling with stucco ornaments and the wood paneling on its walls. Whereas on the outside the following changes were made: the position of the main gate was moved to the middle of the north wing. In the spot of an old entry gate, a new staircasewas built, which improved the communication between the castle and the palace. 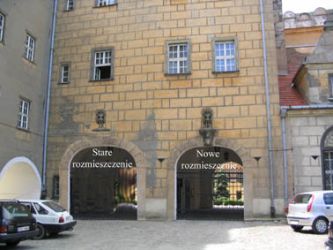 In the winter of 1945 due to the approaching war front, the castle was abandoned. It was not destroyed during the fights. Between 1945-1946 a division of soviet International Red Cross resided there. Their main task was to gather and prepare for transportation former allied war prisoners, mostly French and Italian.
From the end of 1946 till the middle of 1947, the castle was a residence of The State Repatriation Office and an assembly point for displaced Germans. There was also the Scouts Headquarters in the building. All castle’s halls and chambers were publicly available.
Between 1950 and 1953 The Secondary Construction and Road Technical College was located there. Later, many other institutions were based in the castle however, they did not care about the proper maintenance of the premises.
The construction and conservation work took place between 1965 and 1975. Their aim was to adapt the castle to the Scouts’ needs and to adjust it as a museum. The museum, which was a branch of The Archeological Museum of Wroclaw, existed in the palace between 1971 and 1993. The Central School of Scouts’ Instructors and The Central School of Brownie Guides were in the castle between 1975 and 1992.
In 1992 the castlewas taken overby Oleśnica’sDistrict Office and one year later it was passed over to the Headquarters of The VoluntaryLabour Corps to establish there The Center for Education and Upbringing.