Presentation on request of The City Hall

The city council bought the aldermanship in 1407 and became an independent organ that governed the city. The existing wooden house of alderman was not suitable for the council’s needs and its rank. Due to this reason in 1410 (according to J. Sinapius) a new brick town hall (house of the council) was built.

It was a two-storey building in theGothic style with a squared tower attached on the east side. It was not located at the axis of the market because it was built in a place where prior merchants’ house was located. In 1535 the town hall was damaged and then the octagonal extension was added to the tower to elevate it. The town hall was a seat of the mayor and the place for City Council’s meetings and the judges’ sessions. 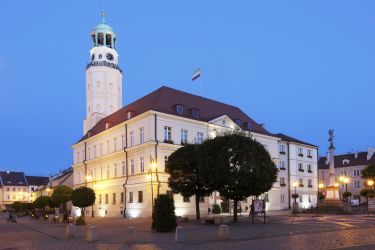 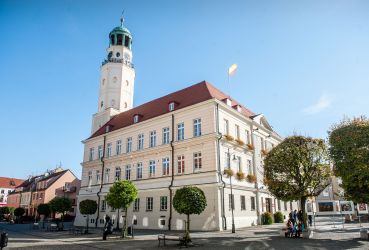 With theincreasing number of city’s tasks, the town hall became too small, and before 1650 the city council decided to buy some of the rooms of the adjacent commercial building (which was separated by a wide path). The new space was later called the south wing of the town hall. The detention centerand guards’ rooms were located there. The two-building layout of the town hall reminded till 1826. 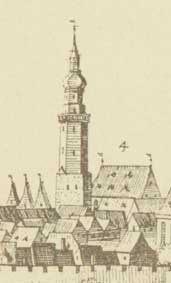 In 1664 the town hall was on the brink of collapse therefore Silvius Nimrod ordered the renovation, during which the town hall has probably been rebuilt.

The next renovation took place in 1730 after the great fire. Around 1810 the destroyed whipping post that was in front of the town hall was removed. In 1823 another fire destroyed the tower. It was rebuilt in 1825 and this date was put on the tower’s flag. A year later the building was renovated in the Classicist style. The outer facade connected the two wings but there were still two separate entrances to each wing and an entrance to the yard.

In 1873 The Victory Column was placed in front of the town hall. Only in 1892 a new staircase was built that connected the two separate buildings.

In the staircase of the main building the coat of arms panels from the 16th and 17th century were embedded in the walls. Thepanels had a significant artistic value and mostly came from the old city gates that were dismantled in 1868 and from the old town hall.In 1892, two vertical flagpoles were added on the roof and one - slanted, on the north wall. Around 1911 the electricity was installed in the building.

Between 1892 till around 1930 the layout of the south building was reviewed and changed to increase the number of shops init. Three store’s windows and two shops’ entrances were created in the front wall of the town hall. Later, the shops with displays windows in the front wall were closed. 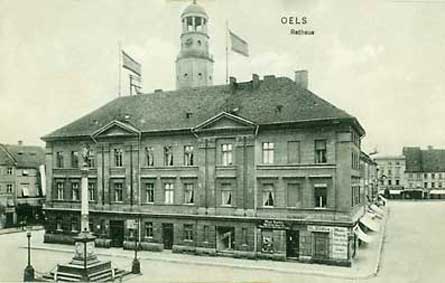 The town hall was greatly destroyed in 1945. After the war ended, the work of clearing rubble has started, the walls that threatened to collapse were dismantled.

In 1958 the design works to renovate town hall were initiated. Probably, due to the reduced accommodation needs, The Presidium of The City’s National Council decided to limit the total town hall’s space. During the renovation between 1962-1964 the Classicist style was preserved in 2/3 length of the building. The rest (the former south wing of the town hall and further three buildings of this frontage) was adapted into a hotel.

The ceremony that ended the renovation of the town hall was held on the 8th of June 1964. Earlier The Silesia Hotel was opened.

Town Hall on the left. Silesia Hotel on the right 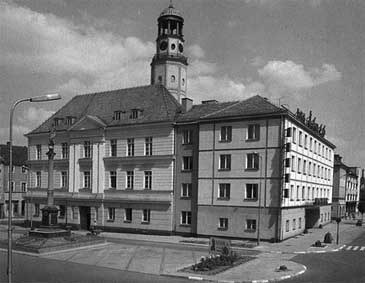 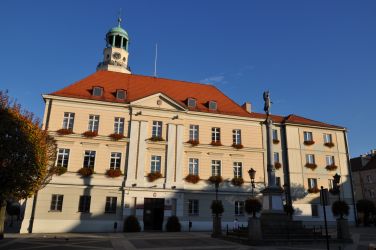